skip to main | skip to sidebar

I see NewsTrust as an important tool for citizen journalism and I wonder why it does not get around more. It gives ordinary people the possibility of applying their own criterion regarding which news or stories should be relevant to the public opinion and explain why by rating the story and commenting it.

I enjoyed the entire process that the site proposes: looking for news which I considered interesting and submitting them to the site. It is clear and easy to do it, and I believe anyone should be able to go through it without any inconvenient. The only problem is expecting to get a feedback by getting people to review it. That seems to be a challenge for the site, since most of the stories receive only two or three reviews. I believe there should be some kind of encouragement that motivates people enough to take the time to do the reviews. Maybe some kind of contest, for instance: people get awarded for giving the best review of the week.

Regarding the rating system, I believe the rate scale should be modified somehow, since even though people provide total different scores and comments, the overall rating is very similar for most stories. They should also work on making clearer to reviewers what the difference between comments and notes are.

I like the fact that they don’t limit the sources to mainstream or independent media, they have diverse types of sources and they make it clear where the information is coming from. And the fact that most people interacting in the site are people with some kind of journalistic interest, makes most of the news somehow appealing. This also provides the site an aspect of social network, where one can find people with similar interests.

Finally I would recommend NewsTrust as a trustable news source but I believe it is fundamental that more people participate actively by submitting news and reviews, to make it a more reliable tool.
Posted by Belen Bogado at 11:37 AM No comments:

A Paraguayan newspaper caught my attention and since the moment I clicked their link a lot of things happened to me. My presentation of ABC Colors' website was a summary of the opportunities a well prepared and entrepreneur journalist can get still get from newspapers.

It happened to me just as I was learning about all the things a journalist has to know nowadays: write, shoot photographs and video, edit, upload, so much!. Struggling with technology as I always did I bumped into ABC TV, a section of the newspaper that, as many newspapers in the world, has its own independent production of video reports and news. They work with reporters from the print edition but they also have two exclusive camera men to do the shooting. The videos section has politics, economy, sports and many other segments. I realized it was a great opportunity to show what I have learned so far , so I asked if they would consider looking at my work. When they said yes I put together a tourism report, I did everything but the editing and sent the footage to them. They liked it and uploaded it. Since that time I had already done three videos and also wrote an article for their Sunday magazine, and I hope to continue doing so as a freelance reporter in a foreign country.
Here are the videos:


Getting to know Cuttyhunk Islands in Massachusetts

ABC is the biggest and most read newspaper in my country. It is not easy for a journalist to get any kind of job opportunity there, so I have to say this time technology definitely gave me a hand.

Another thing I noticed in ABC’s website is that as many newspapers they are constantly looking for new ways to attract more readers. And they found one. Since Paraguay is a bilingual country, many people still speak guarani, our native language. But within Paraguayan newspapers’ websites there has never been a blog that is written in that language. So ABC began doing it and the feedback they got from readers is very encouraging. Mirta Martinez the journalist who writes the blog, told me not only they got local Paraguayans and Paraguayans that live abroad visiting and participating in the blog, but there are also institutions and people from Japan, Germany and the United States that familiarizes with the language because of academic reasons that visit it regularly.

It is a simple formula: more readers = more revenue. Now we’ll wait and see how they translate this success to their print edition.

I also mentioned during the presentation some of the weaknesses of the website: the aesthetics may be improved, it is a little too colorful. It needs maps and databases as well, something necessary to present the information in a clearer and more appealing way to the reader.

Another flaw is that their podcasts are not available for downloading only for listening online, which I guess makes sense since in Paraguay the driving distances are very short, but still, there may be more people listening to it if they could download it.
Posted by Belen Bogado at 4:48 PM No comments:

A good cup of coffee? 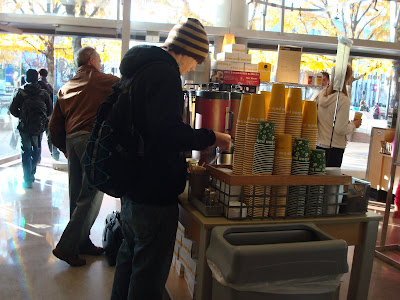 Au Bon Pain is definitely one of Northeastern Students' favorite places. You'll know that by just passing by it at any time during the day: it's always crowded. It might be its great location, it must be the rays of light that come into the local during the day through it's transparent walls. It might be the good service or the tasty pastry and treats you might find there.

I'm not so sure about the coffee though. Not that good for such a great place like Au Bon Pain. I would definitely improve their coffee flavors, not that they don't have enough of them because they actually have many, but its flavors are almost flavorless and taste pretty much the same to me. I could say that is the only thing they could improve (not a small thing though, since they are a coffee place).

Even though I do not think it is the best coffee in town, I would still recommend anyone going there. There is nothing like seating at Au Bon Pain and having a quite breakfast in the morning while watching people pass by.

If you want to find out about other coffee places, check our Caffeinated campus map here
Posted by Belen Bogado at 1:02 PM No comments:

We are finally learning to do mapping!

I think maps serve as important databases and as we already learned in a previous class, they can actually become a story by themselves or at least be the first step to build one.

Learning how to do mapping will be very helpful to me since in my country there are almost no maps that document events or serve as databases.

There are some requirements I believe maps should fulfill. They should be clear and easy to read. I don't mean they should be as basic as the Associated Press Map, but I believe that there are some maps that aiming to be “sophisticated” become somewhat complicated. An example of that is the Elections Map: to understand what you see in the map, you have to read the entire text on the bottom. It is too long and it could lose the attention of the reader. I’m one of the readers who want quick and clear information available.

The Boston Globe's "A reporter's notebook" takes too much time to load some of its content. I've been waiting for over three minutes now and the file is still loading.

Google Maps Mania though has different kinds of maps with peculiar information in them and I like the fact that it allows anyone to collaborate by adding new content and data to the map too.
Posted by Belen Bogado at 1:17 PM No comments:

Emily Sweeney’s visit was really inspirational. I think she represents the young journalists generation and that demonstrates just how challenging that is, because she does pretty much everything, from thinking of the story she’s going to do, shooting the footage for it, edit and write the story, she’s incredible!

I confess I felt a little relieved when I saw her videos: they are creative and interesting, but the quality of them was pretty rough and spontaneous.

I found many useful tools in Emily’s tips. Since we talked about the importance of social networks for journalists, I found a Myspace and Facebook network for journalists and I joined them, of course. She also mentions Wired Journalists, which we are already part of. I was surprised to find out that my space community is also pretty small, only 55 members, although I believe the bulletins published there are very interesting: they announce seminars and events, something I did not find easily in Wired journalists comunity. Facebook has only 14 members, unbelievable!. She is also the creator of both communities, hopefully will get more journalists in there.

During her visit she also mentioned the importance of having your own site, and you can find how to do that going to her website and then clicking here. All the detailed steps, from how to acquire a domain to how to build the site are there. I already have my domain so I will definitely follow her advice.

The Ethics Hotline is something I would have never thought of, and I'm pretty sure there are not many places that do this, it is innovative but speacilly helpful for journalists who have an ethics dilemma. I'm not sure how it works though, I will definitely try it.

Her website also has a list of New England Media and a link to Newspaper Guild database to find out how much journalists earn. Very helpful information for new and young journalists that have a lot to learn!

Emily is a sample of what current journalists should work like. We can not talk about the future work, because if we have to work with cameras to be print journalists nowadays, who knows what we'll have to do in 10 years!
Posted by Belen Bogado at 1:15 PM No comments:

I'm very excited to present my first self-made video.
I think this means I'm actually video blogging now!
If you want to check it, click here
Hope you enjoy it as much as I did.
Posted by Belen Bogado at 7:47 AM No comments: